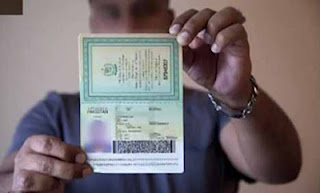 According to recent news in a British news paper "The Sun" they have recently busted a Visa scam been run by Pakistani officials and a Lahore based politician Abid Chaudhary.
The Investigator claims that he was provided with a Pakistani passport with a fake name.
The investigator also claims that he was informed by a Lahore based politician that he will get him a visa for 2 months that will cost him around 7,000 pounds.
1000 pounds are required to get an official letter from the sports board showing you as part of there Olympics team.
The news paper has alerted the MI6 and other intelligence agencies and investigation is on its way.
Mean while NADRA Chairman said from all angles fake passport scam will be checked and if found culprits will be thrown behind the bars.