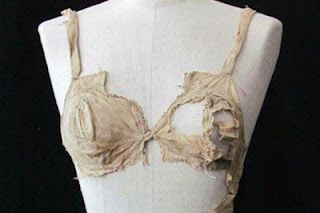 University of Innsbruck said that archaeologists found these bra in a castle in Austria.These Bra are expected to be worn about 600 years ago.Although it was previously thought that Bra's were introduced about 100 years ago.
One specimen of the bra looks exactly like a modern brassiere. said Hilary Davidson, a fashion curator for London.
These garments were unearthed in 2008 but they did not make news as the archaeologists were working on it to check whether they were genuine or not.
Brassieres found were made up of cotton and leather.Leather strips were used to make it look more beautiful.via AP