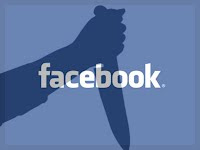 According to BBC the world's leading Tv Channel a house in South Easter Australia was robbed after a teenage girl posted images of cash at her Facebook status.
Police sources said that robber's armed with knife stuck the girl's mother house and took all the cash and other property items from her place.But she said her daughter does not live here now.Police are investigating how the robbers knew the address of girl's house.
Girl posted images of cash that she was counting for her Grandmother and posted images at her Facebook status.
Police sources say that Teens and other youngsters should avoid posting such images that can lead to robbery.Thenewstribe