Us Women Is Addicted To Drinking Petrol 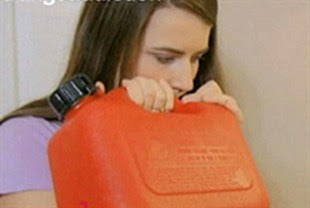 Many people on earth have different types of addictions few of them are so strange that people think how are they still surviving.Some people eat plates,some eat glass,but a women from us is addicted to drinking Petrol.
Shannon became popular when she first came on a TV show named aptly.She said i drank about 18 litters of petrol last year.And with every passing month i am drinking more and more.I usually drink about 18 teaspoons of petrol each day.She said"When i drink petrol it tingles inside my thought and then i feel pain but still i am addicted to drinking petrol.
Shannon mother told i didn't believe her at first but when i smelled petrol from her mouth i was shocked.