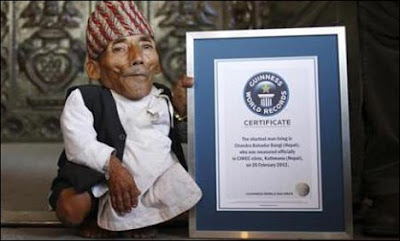 People are crazy to get listed in the Guinness Book of world record and can do any crazy stuff to be a part of the book.but there are very few in the world that do not have to do anything to be part of the book.We have mentioned worlds smallest women in our previous posts and here it is a Nepali villager 72 which is the world,s smallest man.
chandra Bahadur Dangi was measured by the Guinness Book of world record team and declared world smallest man.He measured 21.5 inches Tall.
Previously this record was held by Junrey who was 23.5 inches at the age of 18.
Dangi said he didn't new that there is something known as Guinness book of world record.He is living with his brother as his parents died when he was a teen.He said i do not have any desire to get married.