By Clickemag January 20, 2012
Malinda Star Guido a baby believed to be the third smallest baby ever survived left the hospital on Friday.
The baby was born 16 weeks early with a weight of 9.5 ounces which is 270 grams.The baby is believed to be equal to weight of a soda can or less the the weight of two iPhone. 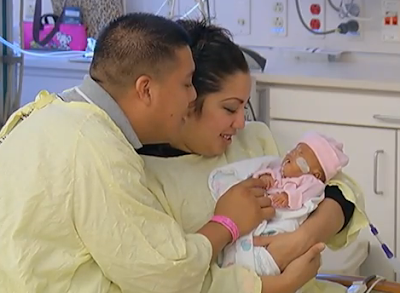 According to global birth registry figures she was the third smallest baby ever survived.
Dr Rangasamay nanotologist said"he was not sure will she survive or not ,it was not less than a miracle"
The baby was kept in the hospital for 5 months.Dr Rangasamay said it has happened first time in his career that a baby which was weight less than 400 grams or 300 grams survived.