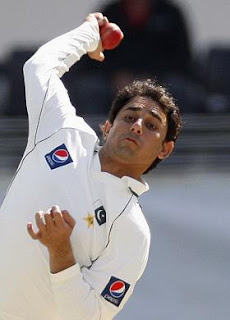 Weather Pakistan team tour England or England tour Pakistan .It is in the past records that English media and players are always pointing fingers at Pakistan.
In past many incidents have happened when they blamed Shoaib Akhter for ball tempering.When waqar and wasim were at there peak and few of them new about the art of reverse swing they put an allegation on them,although Wasim Akram and Waqar have always rejected there allegation by saying its an art.
On the last tour of Pakistan to England three of Pakistan players were charged with match fixing allegation on English soil.Including our emerging fast bowler Muhammad Amir.
Now after today's match former England captain bob Willis called 'Ajmal action questionable'
Where were they for the past several years?
Ajmal responded to the bob Willis comments about his action saying'he will not be affected by the comments made by the British media,his action was cleared by ICC'
The right arm spinner claimed his career best 7/55 against England on the first day of the test in Dubai
Actually they are frightened by Saeed Ajmal new delivery