By Clickemag January 23, 2012
Pakistan has produced number one bowlers in the history.The reason being they have had always come up with new deliveries and shock the batsman.Pakistani bowlers were always difficult to play by any batsman in the world.
If we begin with the world best bowlers pair.Waseen Akram and Waqar Younis.The in swinging yorkers by both were not easy to play.Banana swing and many more deliveries were developed by these bowlers.
Waseem and Waqar when came up with a new delivery reverse swing they were put in a controversy and said "They are cheating in the game of cricket" and when others bowlers including bowlers from England team copied them,it was said "its an art" This is how Pakistani bowlers were differentiated from the others.but the bowling performance and there wickets forced the world to believe they are the best bowlers ever produced in the history of the game.
Bowlers like Shoaib Akhtar were so fast that players sometimes even couldn't see the bowl coming.Shoaib even produced some deliveries that broke ribs,face,teeth,head of the opponent players.
Lets talk about the spinners now, Spinners like Saqlain and Mushtaq have always produced magical deliveries.Saqlain Mushtaq is known for his special Dosra,which swung like a leg break,although he was a offspiner and batsman never recognised whats coming infront of them.
Now Pakistan has come up with a bowler that has shocked the world.Recently a report on a Uk Newpaper called Saeed Ajmal as a bowler with a magic ball.
Saeed Ajmal dosra same as produced by Saqlain Mushtaq is not easy to pic .This is why English batsman that are known to play spin well were not able to play him and gave wickets at regular intervals.
Before the starting of the series between England and Pakistan,Saeed ajmal shocked the world when he announced that he is coming up with a new delivery know as "Teesra"
On the first test of Pakistan Saeed Ajmal made use of his new delivery very well and took wickets at regular intervals.
Till now no one knows how that "Teesra" is bowled,We through watching videos and focusing on the hands have Finally knew how Teesra works.
Saeed Ajmal Teesra works same as a Dosra but it has a hidden surprise in it .Watch this video
This specific Delivery was a Teesra,A batsman famous for his Defence against spinners, Strauss couldn't play it.
The hidden surprise behind the Teesra is that,the bowl doesn't bounce much and stays low.
Doosra in combination with ball staying low doesn't give batsman a chance to judge weather it is doosra or Teesra.
In this specific ball Saeed Ajmal brings his arm from a wider angle on right.No matter how much a batsman works and learn about the delivery this "Teesra" is never gonna be judged by the batsman on the ground.The thing that really surprise the batsman is that ,this wicket was not a turning pitch.What if Saeed Ajmal bowls it on a turning pitch,there is no batsman in the world that can play it.they just need to be very lucky to escape his deliveries. 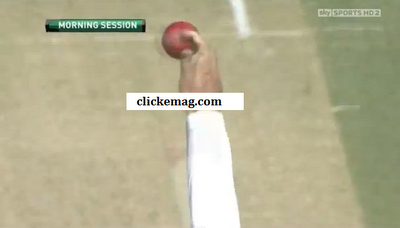 Some of you might be thinking why he didn't bowl teesra in the second inning?The reason being they do not want that bowl to get common .Hope saeed ajmal Bowls his "Teesra" in the next match and Pakistan wins the match and the series.
Learn more about paksitan