Afridi Says No To Bpl For National Duty 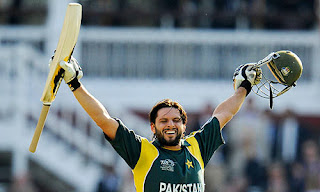 Shahid khan Afridi is now a days playing big Bash T20 tournament in Australia.
Bangladesh premier league is beginning from Feb 9 to 28 and on the other hand Pakistan vs England limited over series starts on 11 Feb in UAE.

"I am waiting for the series against England so it was not a difficult choice for me,i am always ready to play league matches if not required for the national duty"