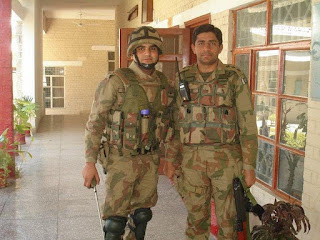 This is the image of two off
icers that gave there life(Martyr) for Pakistan,Captain and major
Thousands of soldiers from Pakistan army died for a war that was not ours.How many US soldiers died?do you
have any idea?nothing as compared to Pakistan.Still we are asked for more.
Our soldiers protect our boundaries when we are a sleep,and they kill our soldiers and forget it just by saying sorry
.Is this the value of a Pakistani soldier?is this what we get after fighting a war for nothing.
Same incident happened last year when two of our soldiers died in a same attack like this and our Gen stopped the NATO supply for 10 days and later on ban was lifted, that's all.
Kiyani says"Aisa dobara nae hona chaeay"Isn't it the same line he said when Osama was killed?
There are two type
of people one of them say ok it happened now we have to cool down and apply pressure on America instead of taking any wrong decision and there is another category of people which say
Is this what we have got?I think kiyani should have said.Soldier for a soldier and no supply of NATO for future.We are not going to fight a war that never was ours.what do you think what should have been down now? leave your comments 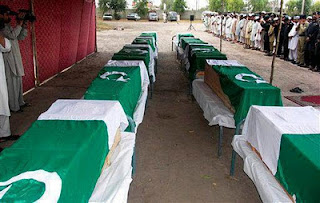